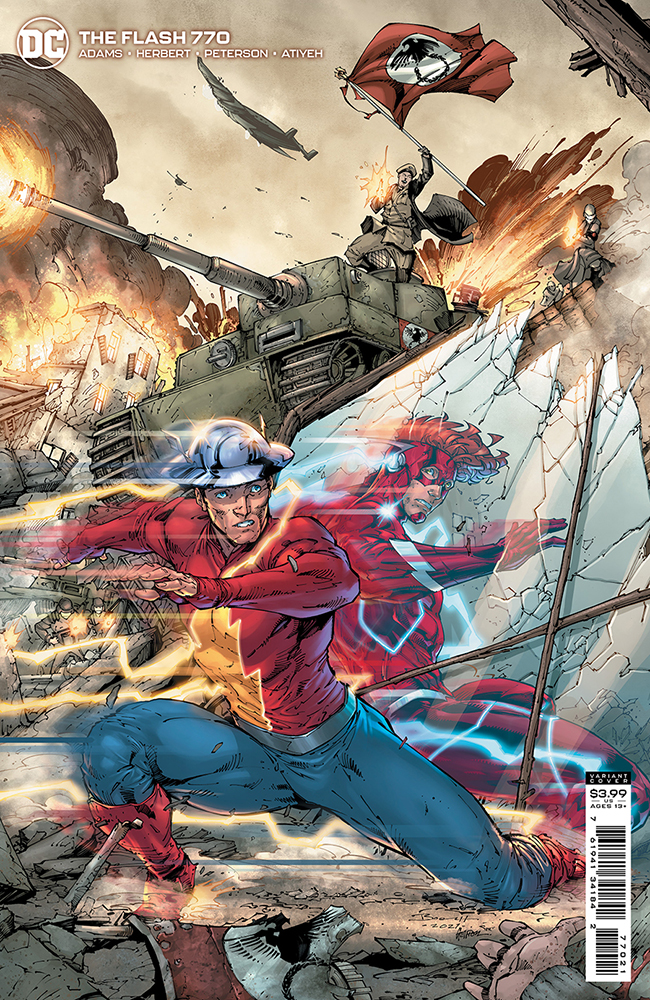 The Flash # 770 is a wonderful comic bringing us Chapter 3 of ‘Blink Of An Eye.’ This tale follows Wally West, who has been trapped in the speed-force (The cosmic force that grants The Flash his super speed.) and has been jumping into the bodies of different speedsters throughout time. This time he finds himself in the shoes of Jay Garrick, the original Flash, all the way back in World War II. Instead of focusing on the horrors of war, Flash 770 tells an uplifting story about hope while twisting time to bring you an adventure you won’t soon forget.

The art for this book has a classical style as the panels are highly detailed with great flow and feel for speedy action. Jack Herbert, Brandon Peterson, Kevin MaGuire and Michael Atiyeh, the artists and colourist for this book, are the stars of the show, with writer Jeremy Adams script not far behind. All the elements blend together for a time travel plot that both makes sense and is pretty easy to follow despite some of the more complex components, such as Wally jumping bodies.

The plot really amps up when Adolf Hitler gets pumped full of speed force energy and plans on using it to turn the tide of the war. Along with all this energy, he’s also in possession of a spear that can control the minds of men, making it hard for our heroes to destroy him in a straight-up brawl. Flash is joined by C-Lister hero The Ray, who by the end of the issue has grown as a character and, in turn, grows on the reader. Like Captain America and The Ninja Turtles before him, Flash joins the ranks of comic book heroes who have cracked Hitler on the jaw for a bit of reader catharsis.

A Message About Hope

The backbone of this adventure happens when Flash and The Ray are captured by the Nazis and beaten within an inch of their lives. As Ray is about to lose hope, Flash talks about how hope and his religion are a few of the things that keep him going in rough times. Eventually, Ray asks God for a miracle, and in the form of a flash of thunder, Wally West is thrown into the body of Jay, blasting open the door to their cell. Given Jay’s sudden change in personality, Ray comments that he asked for a miracle not to give Flash brain damage. It made me chuckle.

The Flash is one of those characters whose power-set is just built to explore the time travel trope and the comic concept of the multiverse. Here it’s put to great effect. This story with many complex concepts and moving parts are presented as this stunningly simple adventure; that can be enjoyed stand-alone or as part of the greater whole.