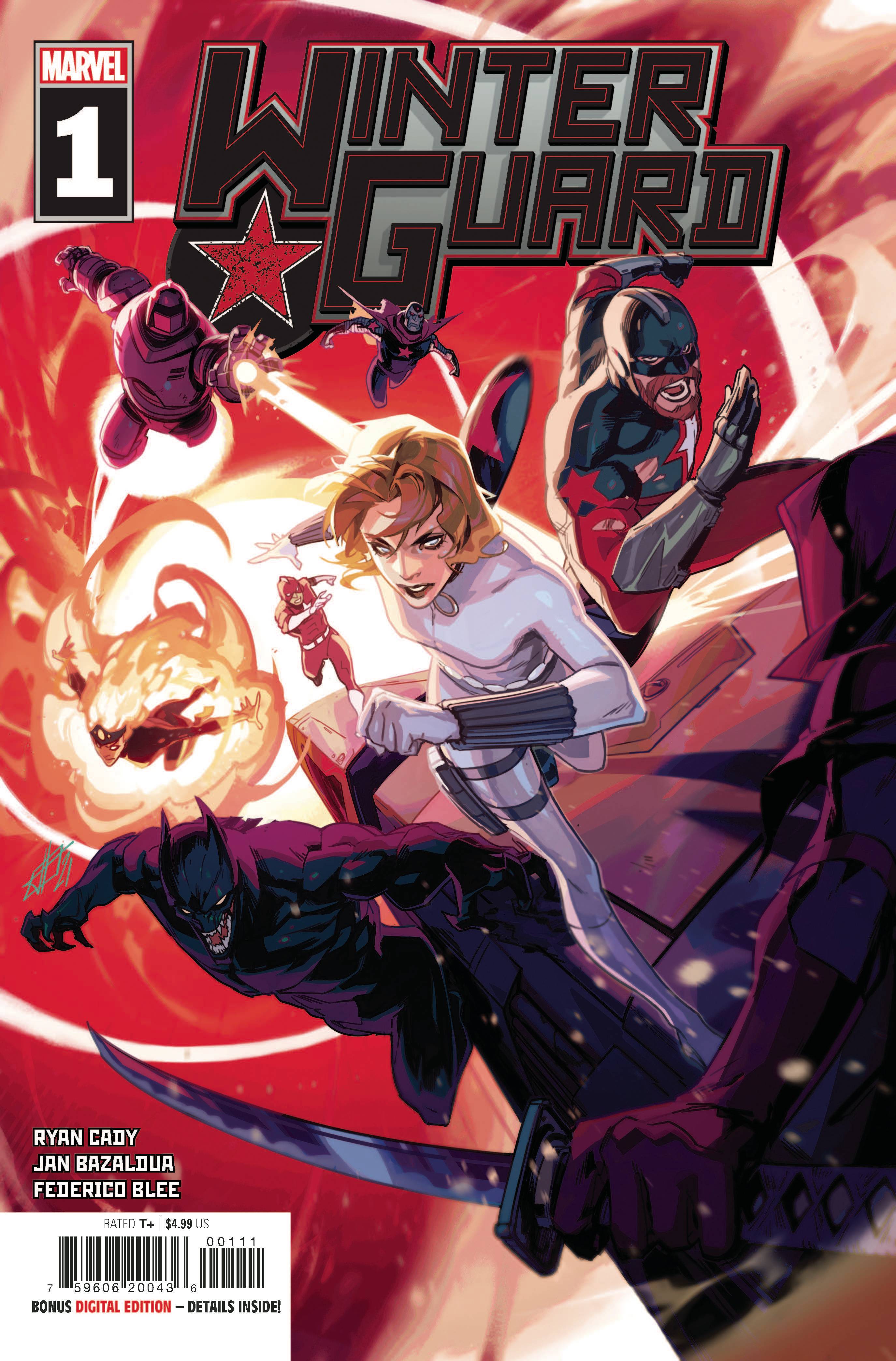 In the Marvel universe, it seems that every country has a super-team.  The UK has the Union, Canada has Alpha Flight and the US has the Avengers, to name the major one.  Now its Russia’s turn with the Winter Guard.

She Hulk has been arrested for crimes against Russia.  Whilst this is a concern for  the Avengers, in the shape of Captain Marvel, for Yelana Belova and the Red Guardian they have other problems.  It seems that the powers that be are looking to clean house, which could have huge impacts for their former friends and colleagues.

The book is written by Ryan Cody, who I don;’t think is well served with a four issue count.  There is a lot of story and  history to go through, all of which runs the risk of clogging up the works.  Cody does well with this aspect, maintaining the level of seriousness that a government sponsored hero-cide should have.  There is plenty of action on show, some of which feels a little chaotic; I am not sure if this is a problem with the plotting or the art, I would assume that it is six of one and half a dozen of the other with all things being equal.  It is good to see Darkstar again; a great looking character that never seems to get a shed load of attention.  Hopefully Cody will be able to spotlight her during this mini run.

The art features the work of two artists.  I am going to start with the prelude artist, Djibril Morissette-Phan who goes for bulky frames and heavy lines.  Aiming for strong characters, Morissette-Phan’s art lacks a little nuance or subtly, or maybe precision.  Things get better when main artist Jan Bazaldua combines strong panel design and body lines with finer touches.  The result is the traditional hero poses which work across the board of various characters. Decent facial elements help convey the impacts of Yelana and her partner in crime’s actions.  Speaking of actions, both the prelude and main act suffer from chaos in the action scenes.  As mentioned, some of this may be story; looking through the book a second time, i can see where a change in camera angle and perspectives may have helped.  Colors are provided by Federico Blee who matches the differences in art, with a scheme that starts of bold before going for broke with a darker style with touches of shadows to help with the ambience within the story.  Vc’s Ariana Maher delivers a font that is easy to read, identifiable to characters and doesn’t impact the storytelling.  Finally there are a raft of covers to choose from; for me, the one with Batman on the cover is certainly interesting.

Of course this book is a timing thing; with both the led characters having a huge part to play in the recent Black Widow movie, this is just the sort of synergy that Marvel looks to extoll from its multi-media based franchises.  I am just not sure how this will play out long term.  Maybe Marvel agree with me, hence the limited issue count.