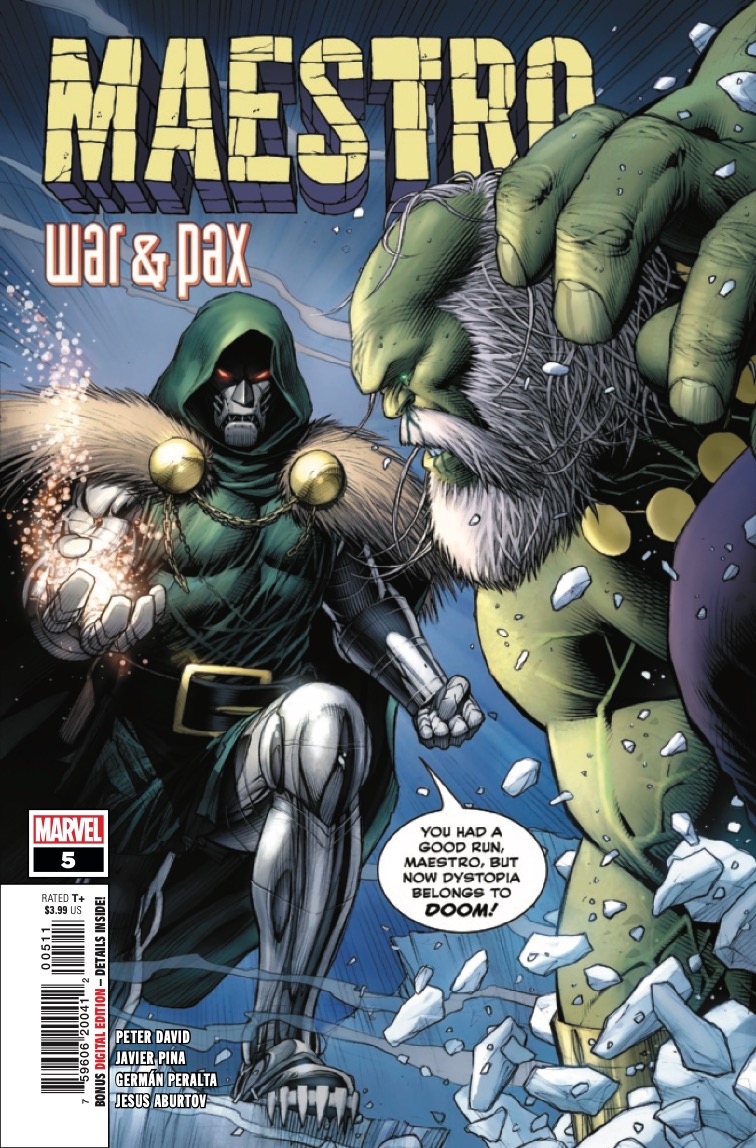 This has been an excellent time to be a Hulk fan, perhaps the best since Peter David was writer on The Incredible Hulk. Part of the reason for this is, of course, the brilliant job that Al Ewing and Joe Bennett have done on Immortal Hulk. However, the other reason has been Peter David’s return to his greatest villain, The Maestro, in his own spin-off mini-series. Maestro is an excellent choice for a villain protagonist, as he is still essentially the Hulk, just a twisted and evil future version of him. Maestro is a Hulk who chose to become like his father and perpetuate the cycle of violence that began with Brian Banner, turning his back on humanity and becoming a monster in the truest sense.

Maestro: War & Pax is the second of these mini-series, set in the timeline of Hulk: Future Imperfect and telling the story of the Maestro’s rise to power in his domain of Dystopia. It has been a pleasure to return to this universe under Peter David’s hand, especially since Future Imperfect is easily my favorite Hulk story of all time. No one else knows the Maestro as well as Peter David does, and he’s always been good at following up on his plot points in a way that is compelling and satisfying.

Another familiar face that I’m pleased to see again is Dale Keown, who has been regularly doing the covers for the Maestro books. Keown has been one of my favorite Hulk artists since his run with Peter David on Incredible Hulk, and he’s only improved on the character since those days. That comes across well with his Maestro, who is massive, imposing and menacing even if he’s not the focus of the cover. That honor goes to Doctor Doom, the villain of this issue, who looks dangerous and majestic here. I like a cover that reflects the contents of the story in some way, which this cover most certainly does. The idea of Doom approaching Maestro with an open hand and a closed fist works, a visual element that hints at the interior story. I am somewhat surprised that this cover features a dialogue balloon, which is becoming increasingly less common at the Big Two in recent years. At the same time, it works, giving the cover a classic feel while also looking stylistically modern.

Peter David does not disappoint at fulfilling the promise of this story, which has been impressive. Ever since Doom revealed himself to the Pantheon, I’d been looking forward to the final confrontation between Maestro and Doctor Doom in this mini. One point that I love about these minis has been Peter David’s choice of antagonists for Maestro, digging from both classic Hulk opponents and enemies from the wider Marvel Universe. Because this is an alternate future, it’s possible to draw on any established Marvel characters to build a story around. The Pantheon were an inspired choice, as we got to see an old friendship torn apart (along with the Pantheon themselves at the hands of the Maestro). However, Doom always was the real mastermind behind them, always acting with his own goals in mind. Maestro is one of the few villains who can compete with Doom intellectually as well as physically, possessing the genius of Bruce Banner in addition to a ruthlessness that can rival Doom. The game of chess between these two master villains is as well portrayed as the physical battle between them, with both getting good, satisfying moments in the issue. The conclusion feels a little convenient, but it works well enough at getting Doom out of play; that said, I do appreciate that the story never quite answers whether this is the Doom of the Future Imperfect reality or if he’s the Doom of Earth-616.

The short backup story is the conclusion to a three-part Pantheon story that focuses on their leader, Atalanta. I’ve been glad to see Peter David return to the Pantheon, and I hope we’ll see him use them again somewhere, whether it’s the Future Imperfect version or the 616 version. Although this backup is a past story that takes place before the Pantheon’s encounter with the Maestro, I’d recommend not skipping through this even if you’re only interested in the Maestro’s story. The short pieces do a good job of building the Maestro’s post-apocalyptic future, giving us a human perspective and showing us how the end of the world has impacted characters we’ve known before. This particular one provides a solid closure to Atalanta’s battle with the Black Scythe, and Peter David does a good job in fleshing out his villain in this story. Peter David excels at stories that offer moral ambiguity with no easy answers, and this is no exception to that. Honestly, though, I’m just glad to see Atalanta and the Pantheon again at all, given how rarely we’ve seen them.

Beyond that, the main art teams put in some solid work on this title. Although I’m not familiar with the work of Javier Pina, he does a good job of maintaining a consistent look with the work that German Peralta has delivered on Maestro previously. The layouts are quite good, and the visual storytelling comes across rather well even in the quieter scenes. Since the main set-piece is an action issue, the artwork needs to convey each motion and each hit. Moreover, because it’s a battle between two great villains, the art has to make both characters look imposing and powerful. Pina’s art does a generally solid job at this, although Peralta’s presence is missed somewhat on the main story. Peralta does handle the backup, however, and this is visually satisfying. His characters are very well realized, and I appreciate the detail he puts into faces, nonverbal behavior, and body shapes. Although not a piece with action in the way that the main story does, Peralta’s work is good at establishing tension by framing the camera effectively, focusing on the important elements of each frame, and by having the action moments be visually impactful. All in all, the art gets across what the story needs, and the visual storytelling delivers where it’s necessary.

Jesus Aburtov handles the coloring duties on Maestro in both pieces, and this helps create a visual consistency between the two stories. His work in the issue tends to err on the side of brightness, which for this comic is not a bad thing at all. The coloring works best during the epic superhero comic moments of the issue, particularly with energy effects and dramatic lighting in the powerful scenes. This also works with Atalanta, particularly when showing the energy effects of her bow and arrows. The coloring is a little less effective with the quieter scenes, which need a more subdued approach in certain frames. The lighting can be a little too much at times when sometimes a little less works better. To be fair, the overall result works, and most of the scenes in this issue are compatible with Aburtov’s approach to the colors here.

Travis Lanham provides some reasonable work on the letters for this comic, though not entirely flawless. The lettering works at its most effective when handling dialogue and balloon placement, which is honestly quite good. Lanham also does a good job of using font size to indicate volume, particularly during the Doom/Maestro fight. This offers an extra level of the dramatic to an already dramatic confrontation, which is appreciated. The lettering makes good use of space, letting the art breathe as it should and tell the story appropriately. Where it doesn’t work quite as well is with effects fonts, which are sometimes too small or too faded to have the impact that it should. A fight between two heavyweights like Doom and Maestro should have weight and impact, and while I get that from the art, the sound effects don’t have the same level of power behind them. Some of the sound effects should take more space than they do on the page, making the hits feel weaker. Still, this is not a huge drawback, and it’s possible to enjoy the issue without even noticing this.

If you’re a Hulk fan, and especially a Peter David Hulk fan, the Maestro mini-series are well worth picking up. I was pleased to see that this issue is not the end; there will apparently be a final Maestro series called Maestro: World War M. Based on the strength of these previous two minis, I am very much looking forward to how Peter David and his collaborators conclude the Maestro’s story there. As a fan of Peter David’s Hulk for many years and as a fan of the Maestro, I am glad to see that there will be a final chapter. Maestro is a fascinating villain while also being a compelling dive into the Hulk as well as the nature of evil. Moreover, the world of the Future Imperfect timeline and its post-apocalyptic landscape offers some compelling territory to explore, in addition to seeing characters from Peter David’s Hulk run and what became of them in this timeline. While not a perfect issue, this issue is a good conclusion to a compelling Maestro story, and that’s good enough for me. In the meantime, I am looking forward to seeing more. For now, I remain hopeful to see Peter David on more Hulk-related projects in the future, whether imperfect or otherwise.