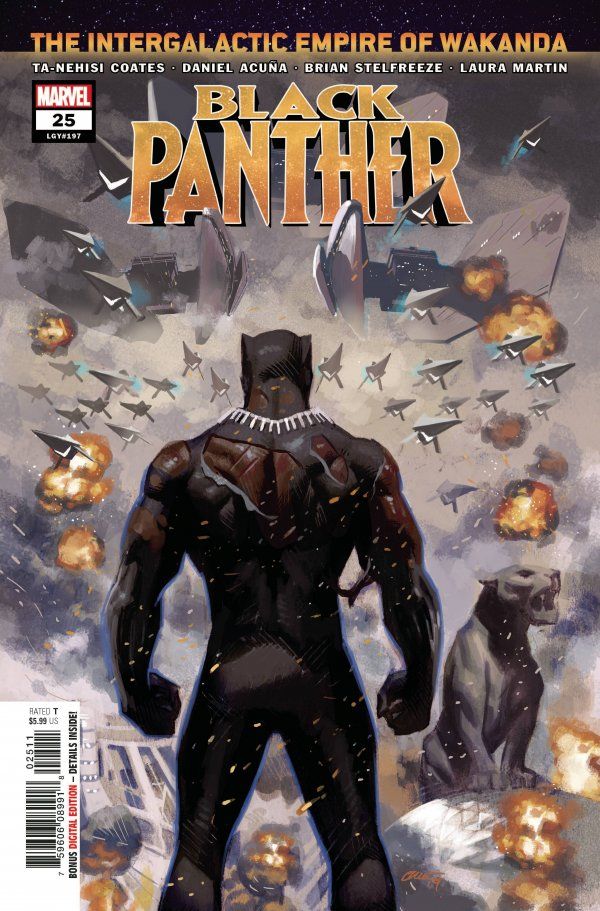 Ta-Nehisi Coates closes out his massive Black Panther run with a massive battle between the Wakanda we know and love the the Intergalactic Wakandan Empire that T’Challa created by sending Wakandans to colonize distant parts of space. After an epic buildup this is the final battle to end all battles. The Emperor N’Jadaka not only has the powers of Bast and of a Symbiote and the mind of Erik Killmonger. He could not get more stacked. The spirit of Bast has landed in N’Jadaka’s daughter whose stand along against her father along with the mythical Wakandan Originators are the vital final pieces to the battle.

The issue opens with massive almost wordless battle scenes. The art shines here with a massive amount of black Marvel heroes defending Wakanda while T’Challa takes the fight right to N’Jadaka. Coates writing does very well with political thoughtfulness and not quite as well with exposition so the details of who is a vessel and what the mission is slows the action down a bit. The issue is at its best when it’s focused on the heroes we know and love with Black Panther and the other heroes getting in some amazing verbal jabs striking at N’Jadaka even as they bring on the pain. Bast and Zenzi add to the chaos before merging and helping Black Panther destroy N’Jadaka.

As Coates does best, the victory is mixed with philosophy as Storm chides Bast for taking so long to take action and in return Bast chides T’Challa for creating the whole mess through initiating galactic colonialism in the first place. T’Challa must now carry the weight of ruling not only the earthly Wakandan kingdom but also the established Wakandan Galactic Empire alongside the heroes of his kingdom and the Marvel Universe.

This issue is absolutely beautiful with Daniel Acuna and Brian Stelfreeze giving us the massive epic art we’d want in an issue of this magnitude. Some of the backgrounds lack detail but it works to draw focus onto the characters and battles. That the artists could portray a battle so vast but still maintain clarity on every individual character shows not only their talent but the richness of the black hero representation in the Marvel Universe.

This issue employs all the strengths of its creators and showcases the massive leadership and pure courage of T’Challa. This is the kind of story fans will be rereading and enjoying for decades to come.